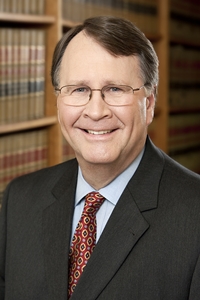 John Pearce is both an attorney and certified public accountant. His law practice concentration is in the areas of business transactions, including acquisitions & mergers, new business structure and formation, tax planning, tax controversy, and estate planning. His transactional experience ranges from small businesses to publicly traded companies. He currently represents companies and individuals in a variety of industries, including construction, land development, communications, entertainment, health care, real estate and manufacturing, and serves as outside general counsel for many of these clients.

His career began in public accounting when Mr. Pearce joined Price Waterhouse & Co., which is now known as PricewaterhouseCoopers. He later attended law school at night while serving as the chief financial officer for a health care company. After law school, Mr. Pearce took a position with Aetna Life & Casualty as Vice President of Acquisitions for their health plans division. In this capacity, he traveled the United States evaluating acquisition candidates and managed the due diligence and acquisition process. Mr. Pearce also served as general counsel for a nationwide managed mental health company before establishing his own law practice.

If you are a business owner and you can only read one book this year, Fearless Business Ownership is that book! Written by two practicing attorney-CPAs and a trial lawyer, all of whom have successfully solved many problems faced by business owners. The authors have also owned and managed successful businesses themselves. Fearless Business Ownership empowers its readers to go forth and operate… WITHOUT FEAR!